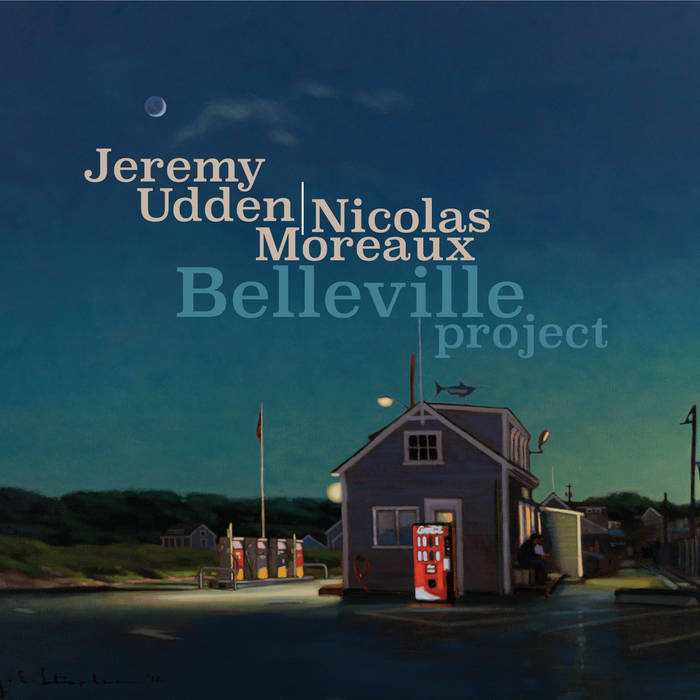 Jazz music has been regarded as the true blender of musical traditions since its inception and it only continues to evolve as musicians continually cross borders, both physical and cultural.

The meeting between New England born saxophonist/composer Jeremy Udden and the French bassist/composer Nicolas Moreaux was quite serendipitous. Udden was house-sitting in Paris and inquired via social media whether there were any musicians interested in playing a session. A session was quickly arranged where the saxophonist first met Moreaux.

Udden had already cemented an identity in the jazz world with his unique voice on alto saxophone and his compositional leanings toward rock and folk music through his "Plainville" and "Folk Art" projects. Having made a name alongside the likes of Tigran Hamashian and Bill McHenry, Moreaux came with tremendous jazz chops and an equal enthusiasm for similar non-jazz idioms. The two musicians bonded over their common interests and kept in contact.

Out of their correspondence the idea for a new project formed naturally, in which they would work together to blend musical elements of French and American folk, rock, and film music into jazz composition. By a stroke of luck their idea fit into the guidelines of the competitive French American Jazz Exchange Grant (from the French American Cultural Exchange and the Mid Atlantic Arts Foundation). They won the grant, giving them the finiancial means to turn their idea into reality. The outcome of their work is the Belleville Project, a name referring to the neighborhood in Paris where they recorded.

To realize their compositions, Udden and Moreaux assembled a tremendous ensemble of musicians well versed in French or American folk music, indie rock, jazz and modern classical music. Saxophonist Robert Stillman is a fellow New Englander, and long-time collaborator with Udden, starting as students together at the New England Conservatory. Based in England, he is now as well known as a composer as master saxophonist. Guitarist and banjo player Pierre Perchaud has been a valuable member of the French jazz scene, while playing alongside musicians as diverse as Michel Legrand and Chris Cheek. American drummer RJ Miller was a natural selection for this project as he has been a member of Udden’s group Plainville, and a frequent standout with both American and European based ensembles.

Under the auspices of the the French American Cultural Exchange and the Mid Atlantic Arts Foundation, the members of the group were able to rehearse on both sides of the Atlantic and set up a recording in the energetic Parisian neighborhood of Belleville, the birthplace of Edith Piaf and a current hotbed of the arts. The compositions themselves were collaborative efforts, with initial input coming from all involved. The finished compositions show a diverse range of influences; there were also sound choices, like that of pump organ, banjo and toy piano, which were influenced by French soundtrack composer Yann Tiersen.

The recording begins with Udden’s “MJH,” a tune named for the beloved country blues singer/guitarist Mississippi John Hurt, which recreates Hurt’s recognizable picking patterns. “Belleville” is a piece Udden wrote specifically for this project and features a simple harmonic structure built diatonically, allowing for a dynamically charged ensemble performance that encapsulates the energy of the project and celebrates its success. “Jeremy” is Moreaux’s lovingly crafted tribute to Udden’s compositional style, which is followed by Udden’s “Nico,” more of an aural portrait of Moreaux, echoing the bassist’s affinity for mid-60s rock. Stillman’s haunting “Epilogue” is a beautiful tone poem with washes of guitar, sax and percussion.

Moreaux’s “11” shows a childlike playfulness over a traditional French waltz form in eleven beats, while Udden’s starkly playful “Bibi” is a punchy ode to a one-eyed cat he and his wife cat sitted while in Paris. There is a hint of trepidation in the vibe of Moreaux’s “I’m 39,” a piece written as he neared the cusp of middle age. Trepidation is replaced by whimsy on Moreaux’s “Albert’s Place,” perhaps the most cinematic and, perhaps, Francophile composition recorded. The recording concludes with the rocking “Healing Process,” a Moreaux composition inspired by indie rockers Dinosaur, Jr. and the wonderful power of music.

Jeremy Udden and Nicolas Moreaux’s collaborative effort on Belleville Project is successful because of the similarities and differences in taste and style. Their mutual admiration for folk and rock flavors added to their distinct personalities as composers and musicians, pushes this French/American alliance into a distinctly original sound space.

Bandcamp Daily  your guide to the world of Bandcamp